First and foremost, we're a music school. We offer guitar/bass/banjo/uke/mandolin/piano/drums/voice/art lessons. If you or anyone you know is interested in individual lessons please don't hesitate! Drop us a line and start playing some music!

We have a lot of events coming up at Gold Lion this month: 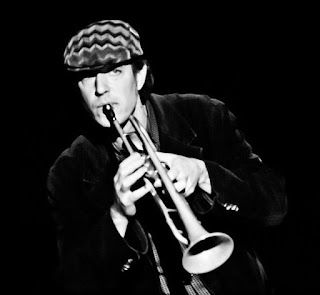 *Since settling in San Francisco in 1997, trumpeter Darren Johnston has collaborated and recorded with an extremely diverse cross-section of artists.  His interests rotate around composing instrumental music, writing songs, and performing all styles of jazz, experimental and purely improvised music, as well as traditional music of the Balkans, Greece, Macedonia, Turkey, and the Arab world.  These interests have coalesced into his primary ensemble of late, The Broken Shadows Family Band.  He has also performed with luminaries such as Hamid Drake, Fred Frith, ROVA Sax Quartet, Rumen Shopov, Myra Melford, Ben Goldberg, Matt Wilson, and others. 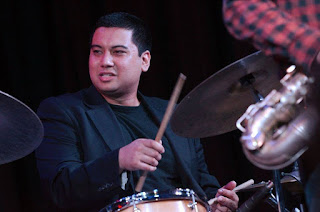 In addition to performing, Hamir has also has taught drum clinics at the Stanford Jazz Workshop, the Berkeley Jazzschool, and Music Academy International (Nancy, France). 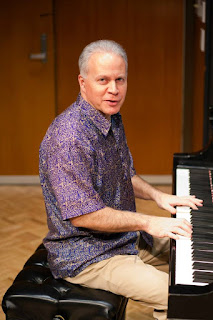 Dr. Gilman has twice been an International Jazz Ambassador through the Kennedy Center for the Performing Arts and USIA, traveling to West Africa in 1999 and East and Southern Africa in 2000. 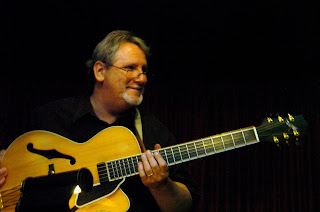 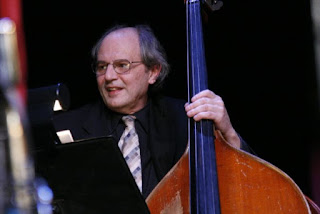 In 1998 Steve performed at The Glasgow International Jazz Festival in Scotland with jazz organ legend Jimmy Smith. He has performed for the 1998 and 2000 Jazz Ambassadors Program held at The Kennedy Center for the Performing Arts in Washington D.C.

*Buca Necak has been described as "creative" and "fluid and powerful" on the acoustic bass. Featured with Clark Terry and Chet Baker, among others, Necak is considered one of the finest jazz artists in the vibrant San Francisco music scene.

*Larry Ochs is primarily found in the worlds of “avant-garde” or “improvised music.” That means that he composes music for “structured improvisation” in general, and in particular for musicians steeped in the art of improvisation, an art form that has really only come into its own in the past 50 years in Western music, primarily thanks to the development of jazz as influenced by the blues and then Western art music, as well as to the increased exposure of Western musicians to the music of Asia, Africa and Eastern Europe. 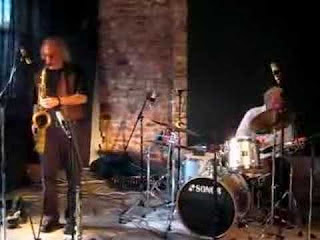 *Vladimir Tarasov attained prominence as a member of the Ganelin Trio, an extraordinary group that played free jazz in Soviet-era Russia and Lithuania.Tarasov is an energetic and resourceful player with a fine ear for tonal color. He was raised in northern Russia and began playing drums in 1961. Besides his work with the trio,Tarasov has recorded his solo music and performed with such American musicians as Andrew Cyrille and the ROVA Saxophone Quartet. He is also the head of the Lithuanian Art Orchestra. Tarasov has composed for film and theater, and is an accomplished visual artist. 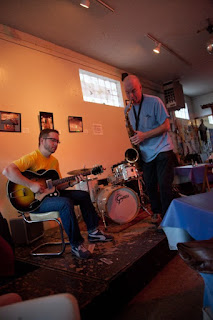 He's been a member of the ROVA Saxophone Quartet for over 20 years. He also plays frequently with Vinny Golia, Ken Filiano, Bill Horvitz, Matt Small and Scott Walton.

*Sacramento guitarist Ross Hammond has played on large stages and in small corners throughout the United States. His sound is equal parts jazz, folk, blues, spirituals and world music. His next release is "Flight," a solo record for acoustic 6 string, 12 string and acoustic slide guitar. Flight is available on 4/14/2015. 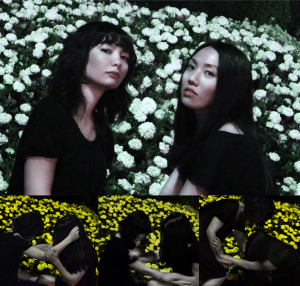 *IMA is the Electro-Percussive duo of Jeanie-Aprille Tang and Nava Dunkelman. The origin of this project came from the intention to evoke emotions through timbres in percussion and electronics, as well as elements of structured improvisation.

IMA focuses in the present moment in time and other distorted time perspectives, mirroring, non-retrograde, reflection, modulation, paralleling, echoes and melodies in speech. 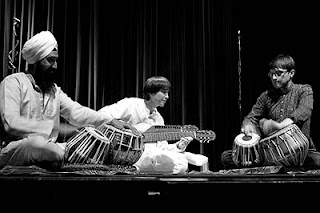 * Founded in 1997, The Nada Brahma Music Ensemble (NBME) is an Indian classical music group created by guitarist, composer, and musical instrument innovator Matthew Grasso. Their focus is to discover the common roots of Hindustani and Karnatak music. 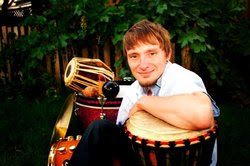 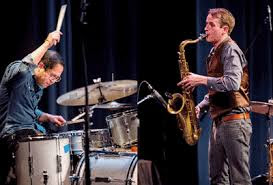 *Called “One of the best Seattle jazz recordings in years” (Earshot Jazz) Bad Luck was awarded the “Best Outside Jazz Group” of 2009 by Earshot Magazine, and a finalist for “Best Avant Group” in the 2009 Inside Out awards. Performing all original compositions, the pair use live loops and pedals to create an astounding range of sound. Icasiano and Welch can quickly shift into fierce improvisations, sound art and carefully constructed harmonic palettes. A duo with skin tight precision and melodic inventiveness, their music is set off by a commanding stage presence. 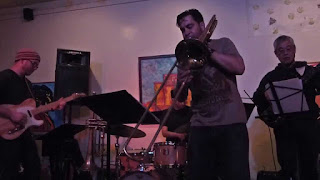 *Los Angeles-based singer Dwight Trible returns to Sacramento. Dwight is a singer who combines the best of vocal virtuosity with musicianship and improvisational skills to the delight of audiences and musicians alike.


In addition to performing with his own group, Dwight is the vocalist with the Pharaoh Sanders Quartet and is also the vocal director for the Horace Tapscott Pan Afrikan Peoples’ Arkestra.

Like his mentors, Dwight is not content to use his music just to entertain people, although he is quite a dynamic performer. He uses his music to bring people together, to bridge the gap between the races, and to heal the human heart. He has received numerous awards for his humanitarian efforts. 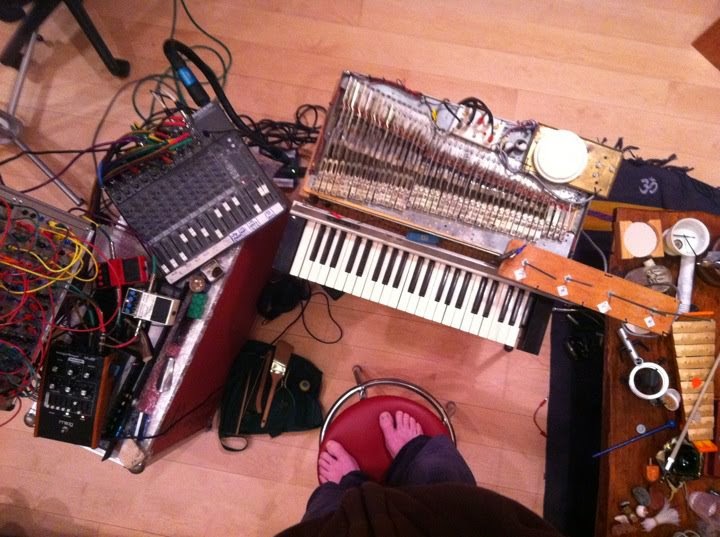 Erick Glick Reiman:
Performing on a variety of instruments, including the prepared/extended Rhodes electric piano, as well as piano, melodica, celeste, organ, Waterphone, and toy piano, SF Bay Area composer/improviser Eric Glick Rieman performs improvised and previously structured music in several settings, both solo and in groups, He has performed with the Mills College Contemporary Performance Ensemble in Oakland, CA, USA since 1999, and received an MFA from Mills in Electronic Music and the Recording Media in 2001. Rieman writes for piano, Rhodes electric piano, and ensembles.
http://www.ericglickrieman.com/

This event is supported by Outsound Presents 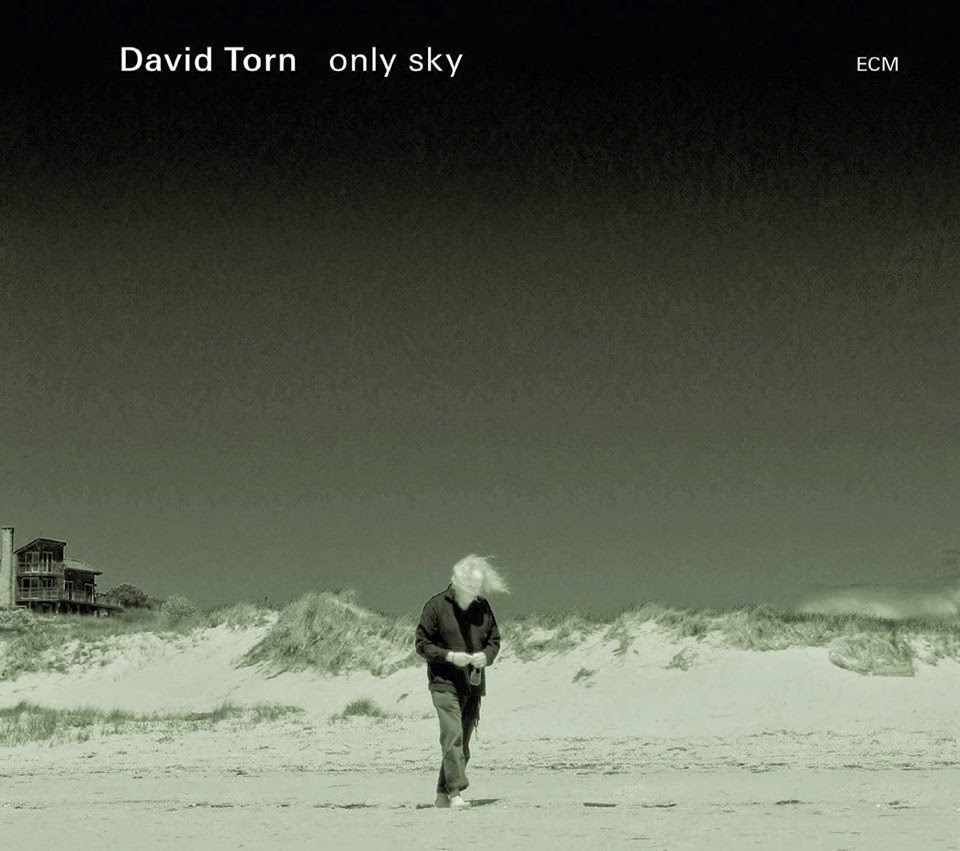 We're happy to announce a solo concert from legendary guitarist David Torn, who is on tour celebrating his new release from ECM Records "Only Sky."
David will be playing a solo, electric guitar set.
Tickets are $17.50 in advance, and $20 the day of the show. 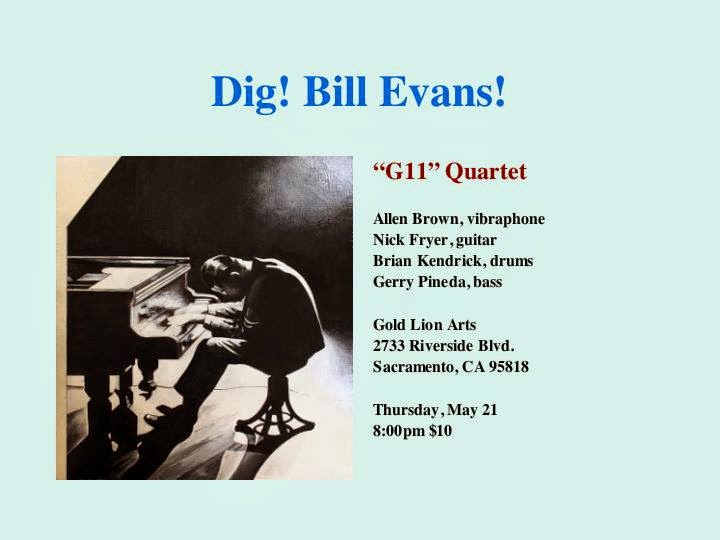 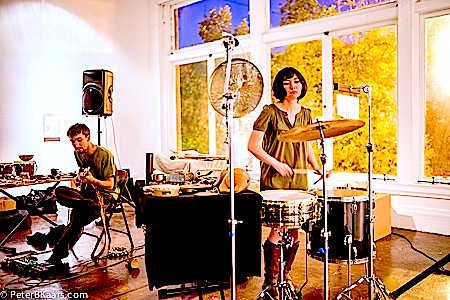 Friday, May 22 at 8pm, $10
Outsound Presents:
Ma Series w/ Nava Dunkelman and Phillip Greenlief and Jon Raskin's 1+1 with Amy ReedNava Dunkelman is a Bay Area based percussionist and improviser. Born in Tokyo, Japan and raised in a multi-cultural environment by an American father and Indonesian mother, Nava’s musical interests span the globe from Japanese taiko to Indonesian gamelan to American marching band, and from classical to contemporary to the avant-garde. Nava studied percussion under Eugene Novotney at Humboldt State University before attending Mills College, where she studied withWilliam Winant, Fred Frith, Maggi Payne, Zeena Parkins, and David Bernstein. Since graduating with a degree in music performance in 2013, Nava has performed and collaborated with John Zorn, Fred Frith, Chris Brown, Dominique Leone and many others. Through improvisation, Nava enjoys discovering her own musical language by exploring experimental approaches to communication, progression, and space.Nava presents: DunkelpeKDunkelpeK is Nava Dunkelman (percussion) and Jakob Pek (guitar, miscellany, piano). This Bay Area based duo offers listeners a visceral, syncretic experience of sound and silence. Inspired and informed by many musics of the world and beyond, DunkelpeK interweaves and explores countless dimensions of vibration, giving being to a sonic reality unlike any other. 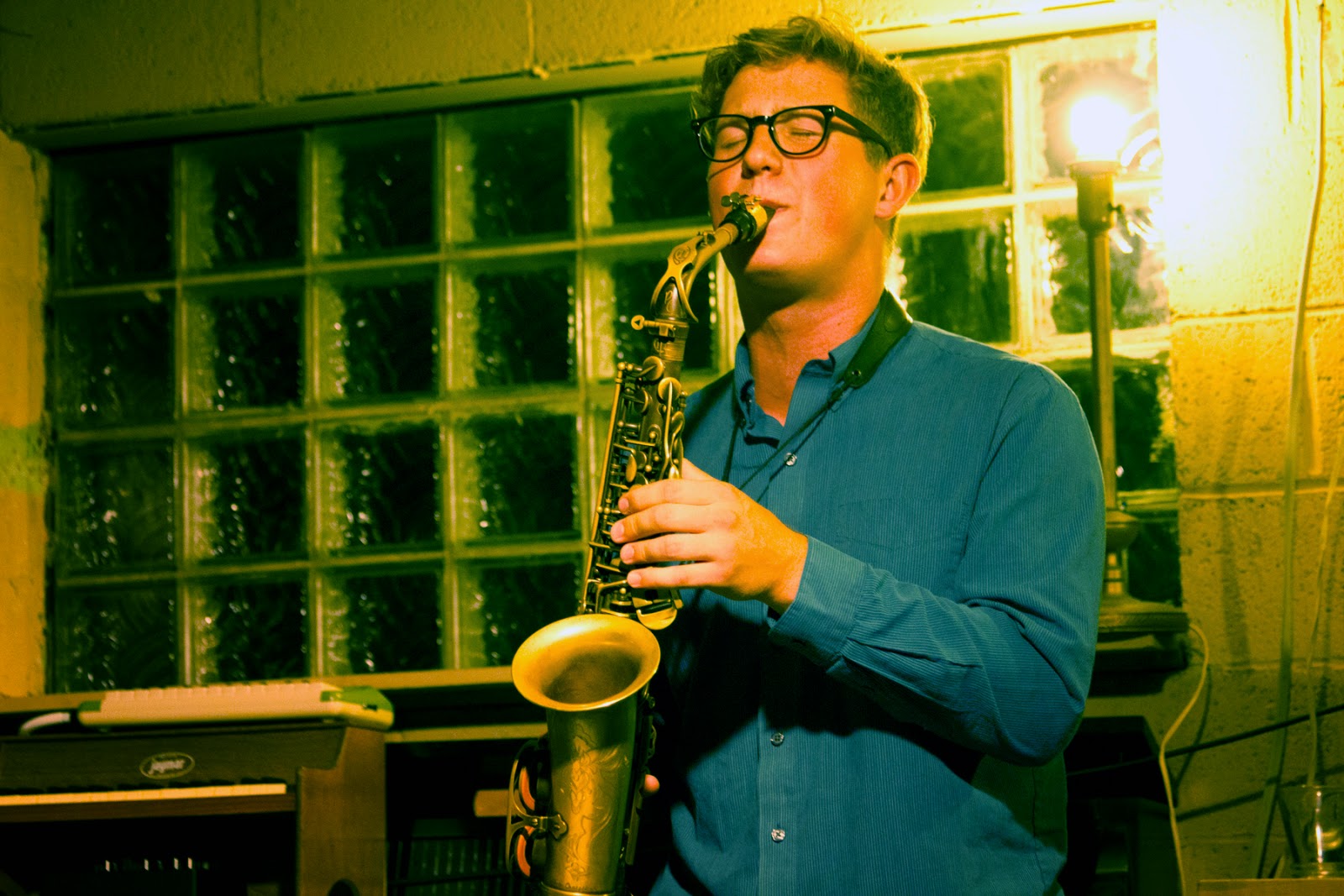 "I am a saxophonist, multi-instrumentalist, and composer. I went to Snow College and am currently finishing a degree in Jazz Saxophone Performance at California Institute of the Arts. I make great fried eggs."
-Logan Hone 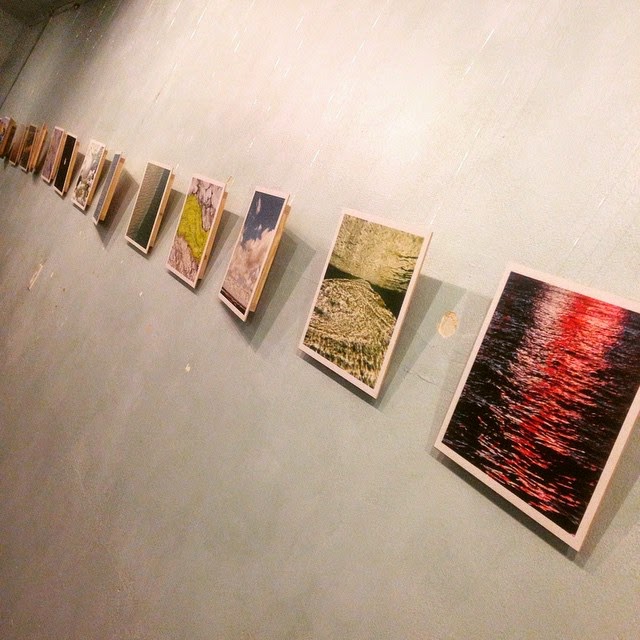 And finally, we'll be having a closing reception for photographer Jesse Vasquez, whose work we've had the privilege of looking at on the Gold Lion Walls for the past 2 months. Jesse's exhibit, called "No Place Better Than Here," focuses on patterns found in nature. All his photos are based around Sacramento. Come by his closing reception. It will be Sunday, May 31 at 3pm. There will be food and live music.
Posted by Gold Lion Arts at 3:52 PM No comments: